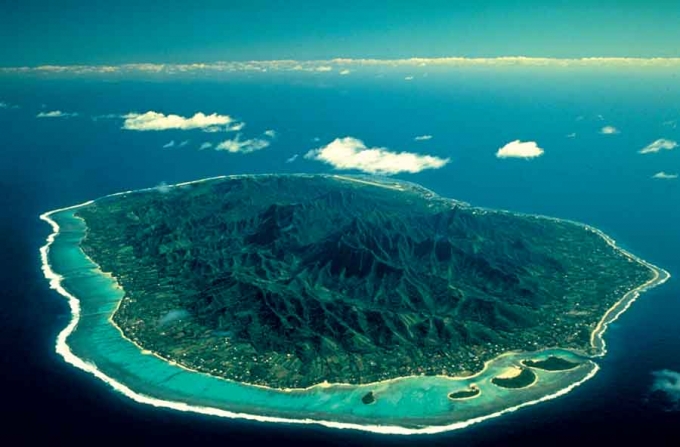 The Cook Islands consist of 15 islands with a total population of approximately 17,000 . They are scattered over almost 850,000 square miles (2 million square kilometers) of the Pacific Ocean, about one-half of the way from Hawaii to New Zealand.

The Cook Islands consist of two main groups, the Southern and Northern Groups.

The Southern Group made up of 9 islands, a mix of coral atolls and volcanic islands which includes the capital island of Rarotonga, the Eden of the Cook Islands‚ Aitutaki and the raised coral atolls of Mangaia, Atiu, Mauke, Takutea, Manuae, Palmerston and Mitiaro.

Rarotonga is the vibrant center and the main hub of the Cook Islands. The island is encircled by a ring road tracing the coast framed beaches and villages, measuring only 20 miles in circumference (32km). It is dominated by soaring mountain peaks, lush rain forests, and palm fringed white sand beaches. Rarotonga sits within a lagoon of turquoise waters guarded by coral reef where the waves break.

One of the highlights of a visit to the Cook Islands is the beautiful island of Aitutaki. Pure white sand beaches, clear turquoise lagoon bordered by tranquil motus (islets) scattered like confetti. This is a place where peace is paramount, slipping from the beach to bathing to bed is the lifestyle, pure sanctuary. Neighbouring island Manuae is elusive, remote and uninhabited, a sanctuary where marine life thrives.

Atiu – the island of birds, is volcanic at the core hemmed by coral limestone cliffs known as Makatea. Structure is very unusual with its wild jungle landscape and unique bird caves that riddle its coast; an ornithologists haven. Atiu is the home of the Kopeka, the Kakerori and the fiery coloured Kura, an eco dream. Set off the coast is Takutea, isolated and uninhabited, pristine unbroken reef with wide white waves that tempt surfers with their unexpected wake.

Atiu’s neighbouring sister islands Mauke known as the garden isle of the Cook Islands is purely exotic, and Mitiaro is where the people live the life of 50 years ago. Mauke has pockets of golden beaches and secret caves with a tracery of underground chambers leading to the sea and home of the miracle oil, sought after for its healing powers. Mitiaro, has underground caves and freshwater pools filled with healing powers and the only island in the Cooks with 2 lavish lakes, home of the itiki (local fresh water eel).

The unique social fabric of the Palmerston atoll arises from the last century when Englishman Captain William Marsters settled here with his 3 Polynesian wives. A perfect tropical atoll with a reef strung with tiny islets and sandy cays like a necklace around the vast blue lagoon.

Mangaia, the southernmost, the second largest island of the Cook Islands and the oldest island in the South Pacific (8 million years old) is an enchanted place. Naturally serene with honeycombs of caves carved from coral limestone, submerged streams signals abundant fertility, an anthropologists paradise and an archaeologists dream.

The Northern Group islands are made up of 6 raised atoll islands that are all unique. These islands are described as the stuff that dreams are made of, that include real gems of the Pacific like Manihiki, the epicenter of the famous cultured black pearl industry, along with sister island Rakahanga. Pukapuka, ancient with historical ties to Samoa, is a fan-shaped coral atoll. Practices and culture is very different which makes them distinctive amongst all Cook Islanders. Fellow Island Nassau is patrolled by Pukapuka which has no lagoon yet it is lush with vegetation and a rich bounty of fish. Suwarrow, treasure island and bird sanctuary is isolated and is a yachties delight with its natural harbor. Tongareva otherwise known as Penrhyn has the largest lagoon area of the Cook Island’s atolls, measuring some 18 miles across with depths of up to 350 feet. Glistening shores coated with pearl shell and a paradise for fishing fanatics. 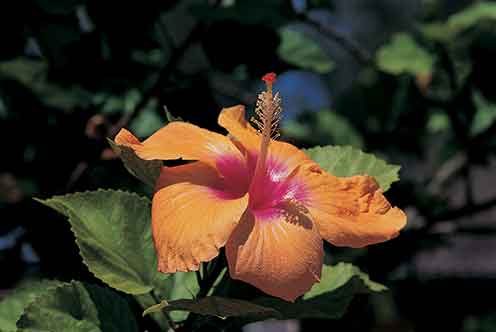 Orange FlowerCook Islanders have long lived in harmony with their environment. Several nature conservations, reserves, and environmental campaigns protect the unique fauna and flora of the islands. Located on the south-east side of Rarotonga, the Takitumu Conservation area plays a major role in protecting one of the world’s rarest seabirds, the Kakeroi (Rarotongan Flycatcher). Takitimu also provides birdwatchers with a chance to see and hear other native birdlife, including unique I’oi (Rarotonga Starlin) and Kakupa (Fruit Dove). Marine conservation has set up marine reserves, as known as rau’i around the islands to restrict fishing to preserve all marine life.

The Whale Research & Education Center on Rarotonga features educational presentations, films, books and displays about the impressive creatures that visit the Cook Islands every year from July to October. The Humpback whales, famous for their singing, migrate through the Cook Islands and are protected within an 800,000 square miles sanctuary established in the Cook Islands in 2001.