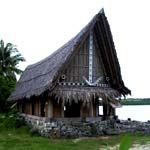 The meeting house, called “Pe’bai(Pe’ebai)” and “Faluw”, is found in each village in the island of Yap, the western-most island chain of the FSM, and it’s most culturally intact.  Pe’bai is a kind of public hall where men, women, and children come together for various community activities. Faluws stand along the shoreline and serves as a port, workspace for men, and a learning space for cultivating traditional work skills. To this day, women are not allowed near Faluws. These beautiful and striking traditional architectures of Yap are constructed entirely by hand using only local materials. 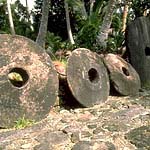 Stone Money, ‘Raay’ or ‘Feaq’ in Yapese, is a traditional currency in Yap and unique in the world, where its usage still exists even today. The value of stone money is derived by the oral history of each piece. These massive carved stones were transported from one particular quarry site in Palau and remain a cornerstone of Yapese culture, as expressed on both the State flag and the State Seal. The money can be seen throughout Yap, but especially within the traditional village centers of the main island that is Yap proper

The canoe – pliant and beautifully organic – binds the sea to the land. Powered only by plaited leaf sails and human sinew, guided by the winds of trade and the timeless maps of the infinite stars above and the ocean’s currents and depths below, it is perhaps the single most important symbol of the Pacific and its islands. The canoe brought the original inhabitants and all of their native foods to the islands of Micronesia. In Yap, traditional navigation and voyaging is alive and strong, with voyages in recent years to Japan, Hawaii and Tahiti to help teach those cultures the nearly lost art of traditional navigation of the ocean, and to rekindle old but ancient ties. The Yap Traditional Navigation Society holds the Annual Canoe Festival, a three-day event held in November-December. The Festival demonstrates Yap’s unique talents that can be seen nowhere else in the world. 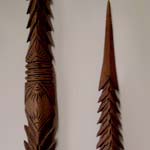 Traditionally, young men would own personalized wooden love-sticks on which they would carve two of the same design. A short one would be carved to be utilized for his hair, the long one would be for the woman. When a man likes a woman, he uses the long love-stick to poke into her hut or her hair. If the love-stick’s design is that of the man she likes, she will pull the love-stick signaling for him to come in. If the woman pushes the love-stick out, it means she is not interested in the man. 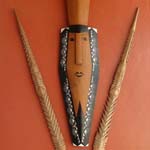 The story of the Devil Mask originates from a long time ago. On the island of Tol, there lived a legendary ghost that kept stealing food from the starving people. As a result, the people decided to carve a devil mask to scare the ghost away. Later on, it happened in such a way that all the people came together and wore the mask. When the ghost came to their place to steal food, it saw devils surrounding the area. The ghost got scared, ran away, and never came back.

Island skills: building a local hut, weaving a mat, making ropes from braided palm husks, planting taro, hunting wild boar, making a trap, carving a canoe, climbing a coconut tree, preparing local medicines and tinctures or making lais from beautiful flowers are all important parts of the true Island life-style. Each of the main and outer islands of FSM possesses unique and exceptional skills that are used daily as part of normal life here. 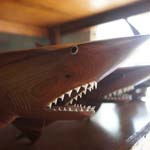 Handicrafts are locally made accessories, woven bags and materials and carvings that are made from wood, shells and fibers of palm tree or banana. These are made by traditional techniques with simple tools such as a small axe, a knife and a needle. A carved shark and a manta from wood or locally made accessories from sea shells or ivory nuts are common popular items. Some of the best artisans of island handicrafts hail from the FSM. These are unique and beautiful souvenirs to bring home. 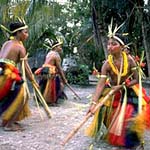 Yapese people are known throughout Micronesia for their skill in traditional dancing. Dances are performed whenever there is a feast or on special occasions such as the marriage of a chief. It is not just one section of the society who dances but rather everybody is expected to know how to dance. As soon as children are mature enough to learn the instructions, their parents began teaching them. The Yapese dance called Churu’ has been passed down cautiously from generation to generation with songs of messages from history and teachings of the villages. Dancers dress their bodies with coconut leaves and flowers and their skins rubbed down with turmeric and coconut oil to give the skin a golden shine. These dances are only performed in groups of men or women separately. Yap perhaps best represents and maintains the art of dancing in the entire Pacific.

Though many types of dances, standing and sitting are of Yapese tradition. These dances are only performed in groups of men or women. Mainly, one of dance what children or young man and woman, “war” dance came from outer island ,and the origin of the art of fighting with a cudgel. It is new what dancing with music came from japan. 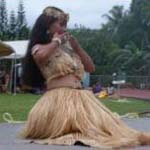 Pohnpeian traditional dances are comprised of both men and women wearing grass skirts and mwaramwar – headdresses made of beautiful flowers and yarn leaves. The bodies of the men and women are rubbed down with coconut oil to give the skin a golden shine. The unique dances include the stick dance for men and women (Kepir for men and Tokia – women), the marching dance (Lehp), where both men and women sing along as they perform the dance.

Yapese women wear colorful striped, loin clothes and grass skirts which are made out of banana fiber and hibiscus bark that is manually hand-woven. Men wear loin-cloths, called “Du”, which comes in various colors: blue, white and red or a combination of the three colors. The color of the “Du” reflects the rank of the man in his village and family.

The Chuuk dress is a locally famous fashion dress among Micronesian women for its colorful and intricate patterns. It is a loose-fitting one piece skirt and one that many visitors find attractive as well. It comes in various colors and characteristic designs that bring out the true FSM Island style fashion and lifestyle.

The Pohnpeian skirt, called “UROHS”, is a popular, local skirt worn daily among Micronesian women which is colorful and decorated with various island flowers or other designs. These can also be special-ordered to fit your needs and tastes.