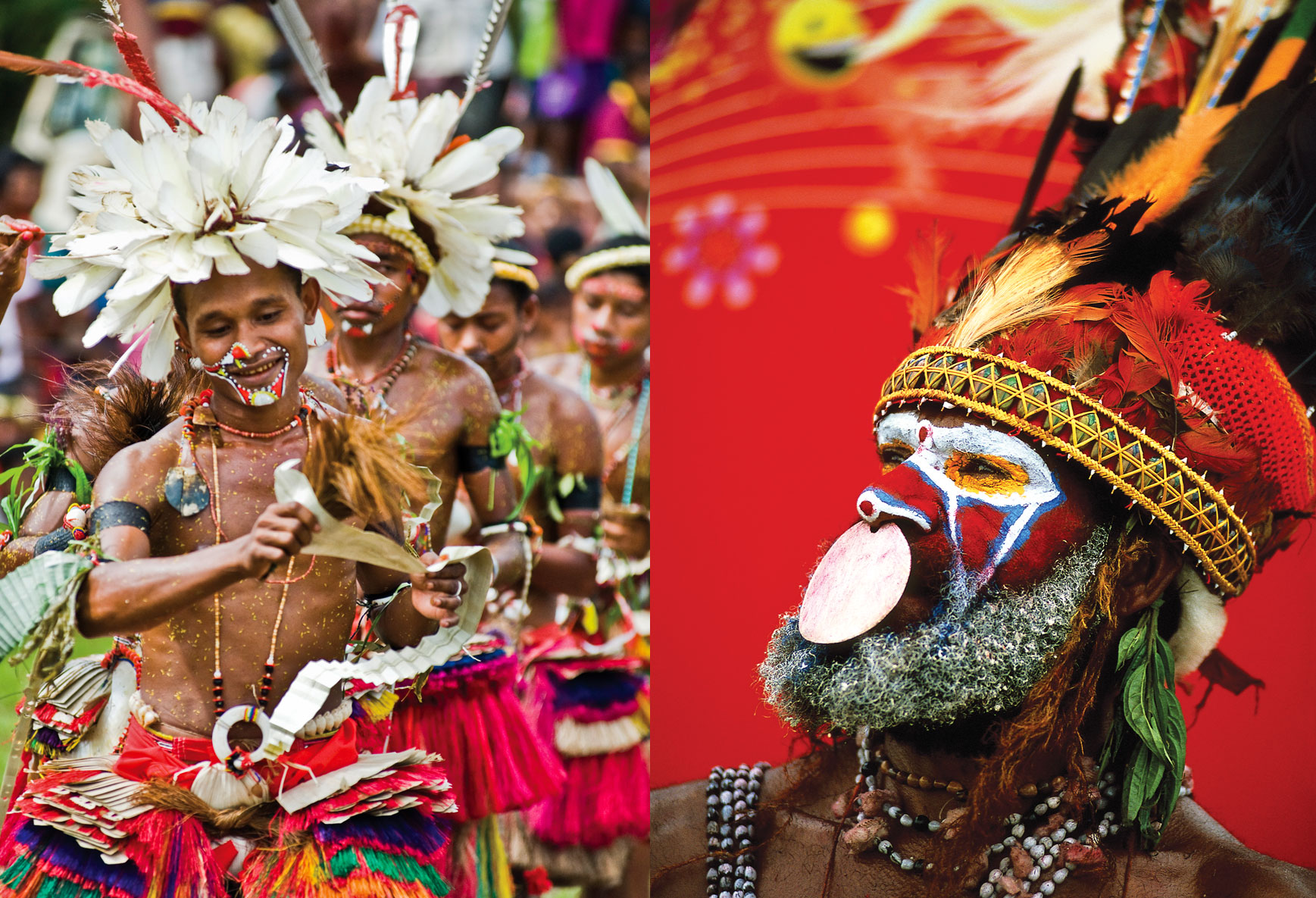 Most of the people of Papua New Guinea are Melanesians, closely related to the islanders of Fiji, New Caledonia, and Vanuatu. Two thirds of the population of 5 million live in the rugged highlands.

Papua New Guinea’s culture is extremely diverse with 800 different languages and 1,000 local cultures. Architecture, dialect, and dress vary from village to village. The different traditions are kept alive in elaborate rituals involving feasts, marriages, compensation ceremonies, and initiation rites. Cultural heritage is celebrated at the annual Sing Sing shows, where villagers from around the country demonstrate their singing, dancing, and elaborate bilas (traditional costumes). The most popular shows include the Hiri Moale, held in Port Moresby every September, the Mount Hagen show, held annually in August and the Goroka Show, every September, which attracts tourist from all over the world.

After centuries of colonization by the British and the Germans, today Papua New Guinea is an independent nation, a member of the British Commonwealth and has strong ties to Australia. The nation’s economy is based largely on resources such as gold, copper, oil, gas, copra, timber, fisheries, tea, coffee and increasingly, tourism.

The impact of modernization brings daily change to Papua New Guinea, but the majority of people, whether they are from the Highlands to the Coastal regions, still dependent on subsistence farming and live in small villages. Traditionally, women are responsible for the household and daily work of the village, while men take care of hunting, trade, and warfare. Village stays are a wonderful way to spend time with people and learn more about the local culture and lifestyle.

More than 800 local languages (in addition to many minor dialects) exist in Papua New Guinea; about a third of the world’s indigenous tongues. Pidgin (Tok Pisin) is common to most Papua New Guineans, and learning a few words can be handy, especially when traveling in more remote areas.

Weaponry like bows and arrows are an important part of the culture; shields have a decorative and spiritual role and are also critical for defensive purposes. Masks in Papua New Guinea are mainly used as decoration. They are found mostly along the Sepik River, but also in other parts of the country. The Chambri Lake masks feature elongated designs with incised brown and white patterns finished in glossy black. At Koroga the masks are made from wood and clay and decorated with shells, hair and pig’s teeth. Murik Lake masks are almost African in appearance, and in Maprik they are woven from cane or rattan. Masks are also carved at Kiwai Island, near Dam on the southern coast.

Drums are the principal musical instruments. There are two main types – the large garamuts made from a hollowed tree trunk and the smaller kundus which are shaped like an hourglass with a snake or lizard skin stretched over one end. Other instruments include bamboo flutes and pottery whistles and jews harps from the highlands.