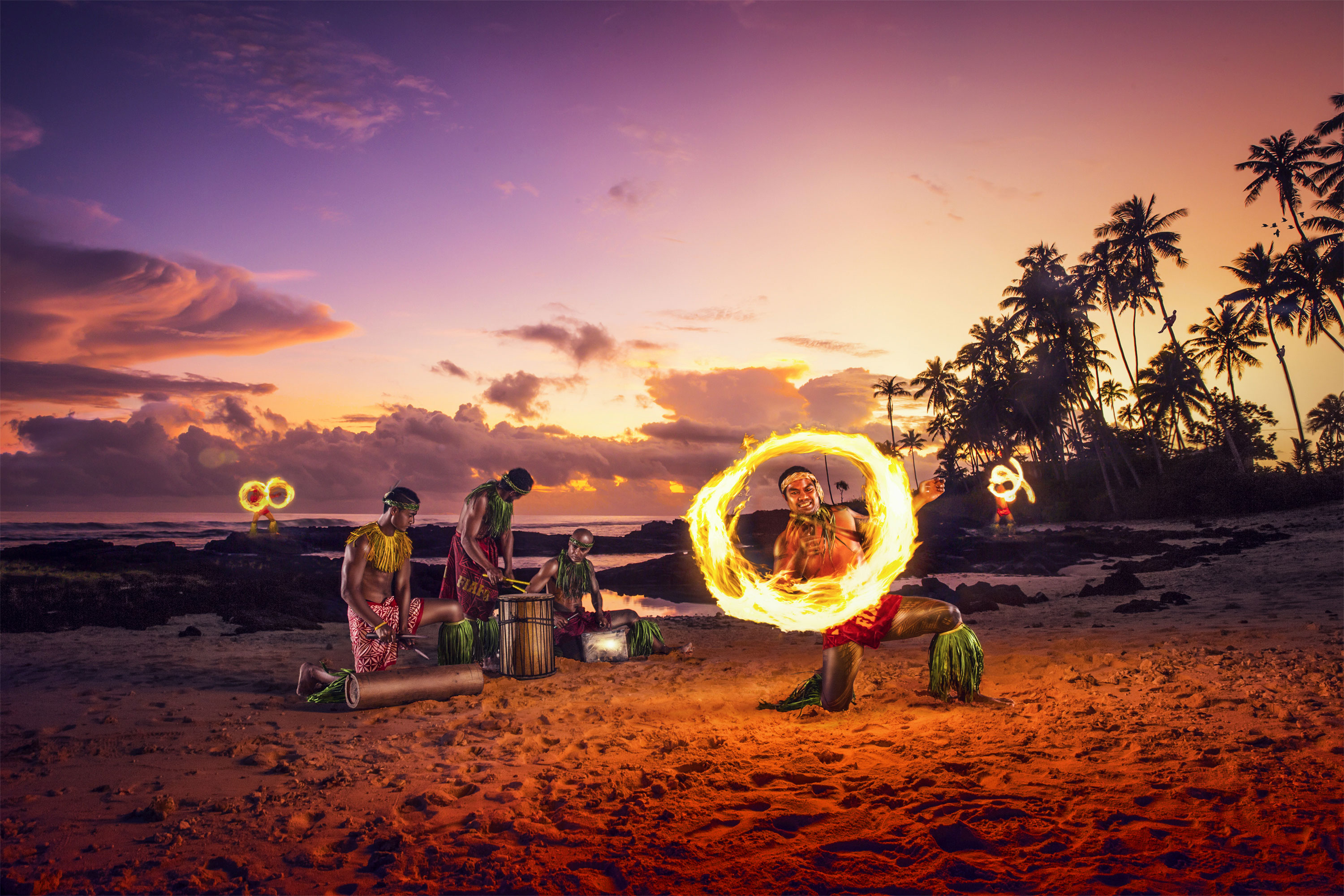 Samoa is famous for fa’a-Samoa. This Samoan way of life runs at its own pace and culture and tradition are an integral part of the society. Despite centuries of European influence, Samoa maintains its historical customs, social and political systems, and the Samoan language.
There are over 362 villages in Samoa with an increasing number of Matai (Chiefs). The land of the villages are owned by extended family units called aiga, which are headed by matais. The main structures in a typical Samoa village are the Fale Fono, where the matais meet to discuss village matters and Maota, where families are brought together to enjoy special occasions or family meetings.

The traditional Samoan dance is called the Siva. The siva is held in any part of a Samoan occasion. It is a very graceful dance performed by the Taupou. Her movements tells a story even without her speaking. Taupou, a daughter of the high chief. Also known to be the princess of the family and must always be protected by her brothers. Hence, why you’ll witness her brothers dancing on each corner just a few meters away from you. Samoans are very knowledgeable and resourceful with their surroundings. Traditionally, women use leaves for medicinal purposes. It is the first line of action that anyone whom is sick would take. Up until now, the practice is still very much alive.

Moving on to the traditional attire for women known as the puletasi, consists of 2 pieces; a top and a matching long wrap around skirt. Traditionally, it had one specific design. Since modernization came about, women are able to have their own design for puletasi however they desire.

Traditional tattooing, is something of value and sacred to our culture that was passed down from generation to generation. However, not all individuals can become a traditional tattooist. Tools used, have sharp ends that is penetrated into the skin are crafted from shells. Changes has been made due to health and safety reasons they opt to using sterilized needles but still keeping it traditional. Men’s tattoo is known as the Tatau or Sogaimiti. Takes weeks to complete all 12 stages depending on the strength of an individual. These marks engraved on a man’s body illustrates the maturity and is ready to take up responsibilities within his family and community. The Sogaimiti starts from rip cage down to the knees and the process is painful. Any man who completes the tatau is considered brave. The rule is, once you start there is no turning back because it is considered an embarrassment to a man’s family name when he stops the process completely due to the pain.

Traditional tattooing for women is called the Malu.  It’s the similar case to men getting the Sogaimiti. They go through excruciating pain and responsibilities with her family and community. She is considered a Taupou or sacred and must be protected. The only difference is that women have their Malu’s tattooed on the thighs to the knees. It takes one day to complete the Malu.

Samoa Cultural Village hosts tours from Tuesdays, Wednesday, Thursday, and Friday at 10:30am. Tour through the village, visiting one fale after the other witnessing traditional tattooing, traditional Umu (earth oven cooking), wood carving, Tapa (Siapo) making, entertainment with some fresh hot umu ready to be served on your Mailo which is a plate weaved from coconut leaves (this is usually done at the beginning of the tour). Samoa Culture Village Family invites tourists to be part of an authentic experience and be part of our way of life “Faa-Samoa”. By the end of the tour we hope tourist will take with them something of big value back home.